You can’t visit Barcelona, Spain without seeing the work of its foremost architect: the late, great Antoni Gaudí. You might have visited one of his two most iconic masterpieces: the Sagrada Familia and Parque Güell. I’ve been lucky enough to visit these two UNESCO World Heritage Sites, so on a recent trip to Barcelona I decided to visit a third: Casa Batlló.

Located in the heart of Barcelona not far from the renowned La Rambla street, Casa Batlló is a beautiful, quirky, anachronistic building. Originally constructed in 1904, its abstract design and brilliant functionality make the house uncharacteristic of when it was built. In fact, it’s said that some of Gaudí’s designs in the building heralded the architectural trends of the late 20th century.

Commissioned by the Batlló family, Gaudí was given total autonomy and creative license with his design. He did not even have a blueprint of the building’s construction – just a small, to-scale model he had built and left unfinished so could have total control and supervision of the house’s design. Locally, the house is known as the “House of Bones” because of its visceral, skeletal façade. It looks as if Gaudí intended to avoid using straight lines: oval windows and undulating lines permeate the house. It’s these round lines that look like waves and give the house a maritime motif, like one is underwater. Blue tile runs from the bottom of the house’s interior to the top floor, gradually changing shade from dark to light blue (this also ensures the uniform distribution of light throughout the house). The only exception to this sea-theme is the roof of the house which looks like a dragon’s spine, and the attic which looks like the dragon’s ribcage. Pretty wild imagination he had, right?

Despite the surreal aspect of Casa Batlló’s design, the functional aspects of Gaudí’s construction are very real, and made me think how ahead of his time he was with sustainable architecture. First, he controlled temperature and air flow, decades before air conditioning would be used in homes. In several windows and doors, Gaudí designed slits that looked like gills (to go with the sea theme), but were really meant to circulate air. (This is very important considering it was 95 degrees when I was in Barcelona!) Another sustainable design is the mosaic façade of the house. Apparently, Gaudí saved money and resources by repurposing recycled glass and ceramic to create the breathtaking mosaic that covers the entire exterior of the house. Third, the four chimneys on the roof that look like part of the dragon are crooked, polychrome chimney stacks designed to prevent backdraft. Lastly, also on the roof is a large skylight that allows natural light to enter the house. The periphery of this skylight is surrounded by drains that function as a well for drainage from the laundry rooms, located in the attic.

Overall, Casa Batlló is a must-see if you’re visiting Barcelona, and an inspiration for architecture everywhere in the world. I loved visiting this house and seeing firsthand how Gaudí brought beauty and functionality together. 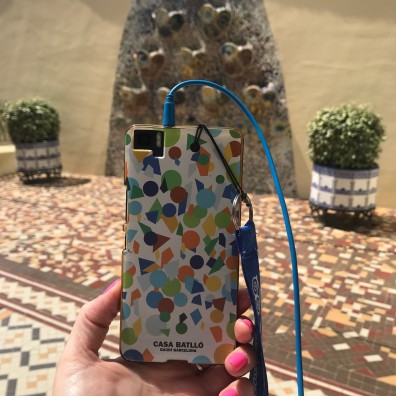 The audio tour of the house was phenomenal: informative but brief.

The living room exemplifies the motif of the strength of the sea. 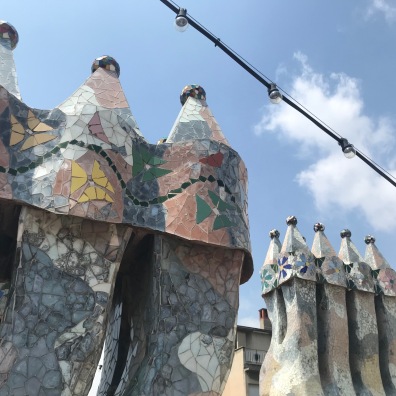 The various shades of blue tile running through the house.

An example of how design functioned to circulate air. 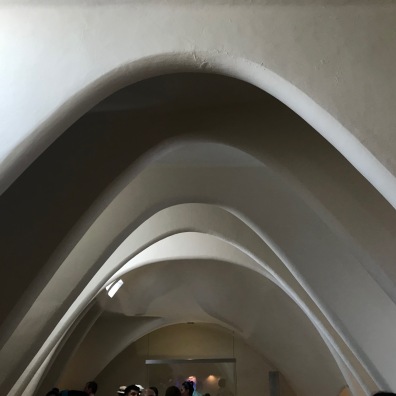 The rib-cage design in the attic.

Some of the recycled mosaics used for this wall in the house garden.

The author on the roof of Casa Batlló. 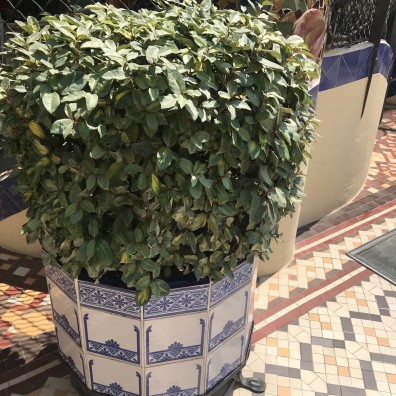 More mosaic and tile in the house garden.

© Rissponsible Living, 2015-2017 and Marissa A. Baly. Unauthorized use and/or duplication of this material without express and written permission from this blog’s author and/or owner is strictly prohibited. Excerpts and links may be used, provided that full and clear credit is given to the author and Rissponsible Living with appropriate and specific direction to the original content.