It is the first week of spring and it has not been the warmest welcome to the season.  Trees are brown and bare, garden beds are wilting, and winter coats have not yet been put into storage.  It’s not just dismal that we have had a prolonged winter — it’s disheartening that some flowers may never bloom.

The world-renowned cherry blossoms in Washington, D.C. are victims of this unusually cold start to spring.  According to the New York Times and Washington Post, the recent cold weather has killed about half of the cherry blossoms that usually dot the city skyline and attract flocks of tourists.  What will Washingtonians do without our annual cotton candy wonderland?  And more importantly, why is it so dang cold?

I googled “why is this spring so cold” and nothing came up for 2017, which must mean not as many people as I thought were asking the same question.  One of the reasons why there have been record low temperatures in the springs of recent years is global warming.  The rapid rate of the warming Arctic is causing drastic changes to the pattern of the Jet Stream, which is one of the largest determinants of climate for North America.  The continent has had series of extreme weather since December 2013, where it’s been cold in the east and warm in the west.  This contrast in temperature in different regions is a major driver of weather patterns because it creates an imbalance in atmospheric pressure.  Ecologist Chris Helzer simplifies it for us:

“Arctic air to the north of us is less cold than it used to be, so there is less contrast between that air and the warm air to our south.  That weakens the jet stream, causing it to make large loops as it moves from west to east.  Equally importantly, those loops tend to stay in the same place for a long time.”

Keep in mind, the above information was from spring of 2013, when the average temperature in March was 13 degrees colder than March 2012.  At that time, warm air over Greenland was redirecting air currents “like a rock in a stream,” meteorologist Greg Carbin said.  So given this was four years ago, can you imagine how much Arctic ice has melted since, and how much warmer the Arctic Circle will become?  Because the strength of a jet stream depends on several variables that climate change effects — location of high and low pressure systems, warm and cold air, and seasonal changes — it seems like our springs will only grow colder with time.

So what does this mean for us?  Well, you may have to wait until you put freshly cut daffodils or tulips on your dining room table, and if you’re a runner you won’t be wearing your short shorts any time soon.  What we have experienced this March is not a coincidence, but a consequence of global warming and anthropogenic climate change.  My greatest fear is of the seasons reversing; of future generations not having a White Christmas or knowing that flowers are symbols of spring, not early summer.  Our falls are getting warmer and springs are getting colder and it’s not supposed to be this way.  Hopefully there is a solution, and that we figure it out sometime soon.

On the bright side, I attempted to see our nation’s capital’s cherry blossoms and they didn’t disappoint!  Enjoy these pictures of the half of the blossoms that persevered and are in full bloom, to the delight of many tourists and locals: 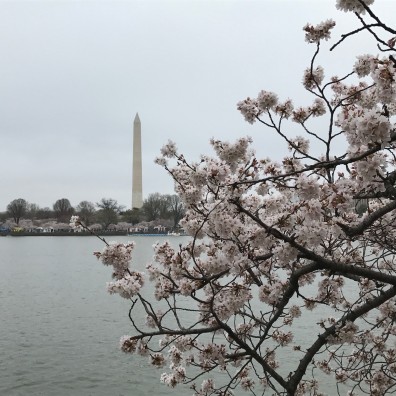 One thought on “Where is Spring?”

© Rissponsible Living, 2015-2017 and Marissa A. Baly. Unauthorized use and/or duplication of this material without express and written permission from this blog’s author and/or owner is strictly prohibited. Excerpts and links may be used, provided that full and clear credit is given to the author and Rissponsible Living with appropriate and specific direction to the original content.